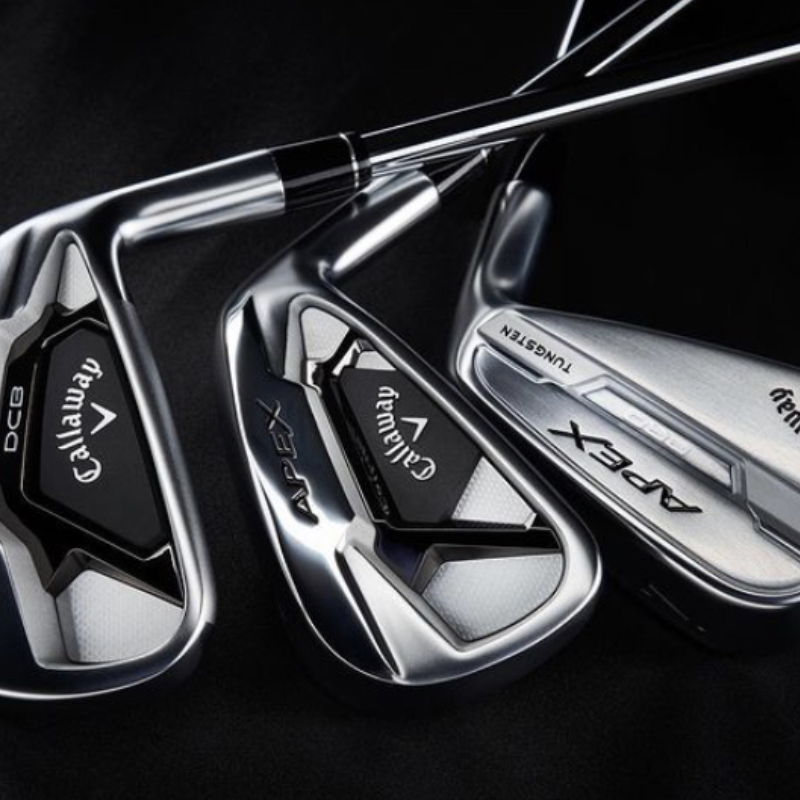 Callaway first introduced the Apex model for the first time back in 2014 as a forged distance iron. The original models were game-changers for most as Callaway pitched a set of irons that sit between game improvement and players irons which most golfers would put themselves in. This meaning that the market for this style of club is huge.

Traditionally Callaway has always released two apex irons: standard and pro. But since the introduction of rival brands releasing multiple iron types, Callaway has had to adapt. In 2021 Callaway has made a huge statement move by releasing Apex, Apex Pro, Apex MB, Apex DCB  and Apex TCB. This means that there is now an iron for every type of player, from tour pro to club golfer.

These are some of the nicest looking clubs to ever be released not only by Callaway, but any other manufacturer. The Apex MB’s are a thing of beauty, but they aren’t for any ordinary player. These are built for the best of the best players and even some tour players would opt of using these as they have to be hit by the purest of strikers.

They are a very classic shape with a super-thin top line and little to no offset with a stunning chrome finish. The blade length and depth of the sole means that there is room for very little forgiveness in this club and off-centre strikes will be punished.

This is the flagship of the apex irons. The new Apex Pro irons are a great alternate to players who want the look of a bladed iron but with that extra bit of help to give you confidence when at address. The Apex Pro has a hollow body construction which means it has up to 90g of tungsten weight inside, which Callaway say is ‘massive’ for this type of iron. It’s no shock that Callaway have opted for a hollow body designed iron with the recent success of TaylorMade's P770’s and Mizuno MP-20 HMB.

Callaway's A.I. designed Flash Face Cup is in a forged Apex Pro Iron for the first time ever. This improves ball speed for greater distances and improves spin robustness for every club. Unlike the Apex MB, the huge amount of tungsten weight in the Pro’s allow for far more forgiveness and improves launch characteristics.

For the first time ever, Callaway has implemented their Tungsten Energy Core into an Apex iron. This has up to 5x the amount of tungsten that was in the Apex 19, resulting in a precise CG to promote a great launch through the set.

These irons provide the player with an extraordinary level of feel due to the forged material and premium construction. This clubs personifies the forged distance category of irons and does so glowingly. Leading the way for irons of this calibre for other manufacturers to follow suit.

Apex DCB is the most forgiving apex iron ever produced. It has a deep cavity and a widened sole width produced for an easy launch and better turf interaction. This iron completes the range for the higher end of the handicap system making apex range accessible for all players.

The fifth and final iron of the Apex family. TCB (Tour Cavity Back) which fits perfectly between the MB and the Pro irons. This is specially designed for elite players who like all of us, want that bit of help the cavity offers. Fun fact, only 10% of tour players use a bladed iron, so don’t be so beat up that you aren’t able to use these irons.

All these irons are available for custom fitting by one of our PGA Pros or extremely experienced custom fitters.