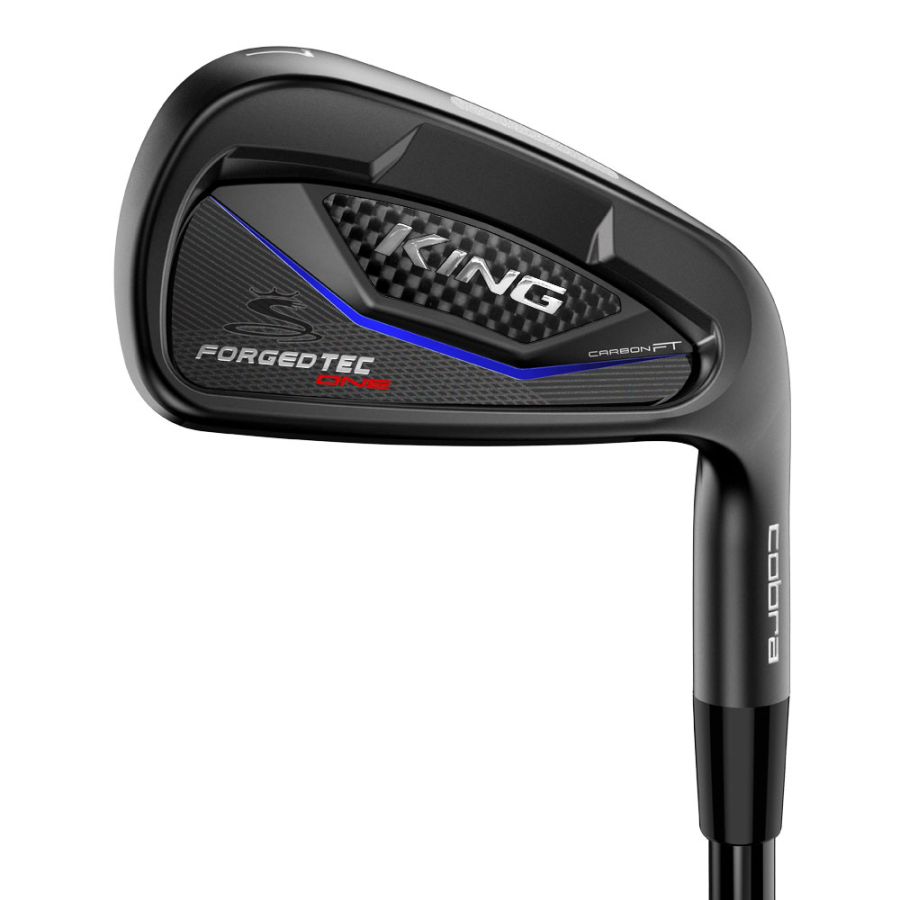 One setup. One swing. Sound good? Now it's possible with the new Cobra King Forged Tec Black One Length Irons. The precision and feel of a player's iron with the playability and forgiveness desired by all, now re-engineered in a one length setup for added consistency.

One swing for every shot, better distance gapping, tighter shot dispersion, and a more accurate short game. In a traditional set makeup, having more swing variables causes more room for error. A ONE length set makeup allows you to have one setup and one swing, simplifying your game and bringing more consistancy to your round. Engineered to suit golfers from Tour level to mid-handicap the King Forged Tec Black Irons feature an all new multi-material TEC (Technology Enhanced Cavity) construction combining a faster forged steel face, Carbon Feel Technology, and tungsten weighting that work in harmony to deliver the perfect blend of distance, forgiveness, and precision. Cobra's engineers have used 4140 Chromoly to create the face of the Forged Tec Black Irons, this material is commonly used in applications that require extreme wear resistance and toughness, Chromoly steel features a higher strength-to-weight ratio that allows it to be forged thinner to deliver increased ball speeds, shot after shot. To improve feel Cobra have integrated a lightweight medallion into the back of the head. Constructed using carbon composite material it effectively dampens vibrations at impact, resulting in a soft, yet responsive feel demanded by the better player. Every golfer needs a little help now and again, and with the King Forged Tec Black Irons, Cobra have utilised tungsten weighting to do just that. High-density tungsten weights have been strategically positioned in the heel and toe areas to lower the clubs CG and deliver more forgiveness and precision, allowing you to hit more fairways and attack more pins. In re-engineering the King Forged Tec Irons Cobra have taken a turn to the dark side. Introducing DBM (Diamonized Black Metal) Technology. A revolutionary surface finish that provides the irons with extreme wear resistance, reduced glare and a professional look preferred by better players. The process chemically implants the black finish into the club head, increasing durability, without affecting playability, for longer lasting, better looking irons. Finally the pièce de résistance of the current Cobra range and potentially golf's most advanced technology to date, it's Cobra Connect ™ , Powered By Arccos ™ . Electronically enabled grips in every iron, provide detailed stats on each shot during a round, allowing golfers to access an in-depth analysis of their game using the Cobra Connect ™ app on their Smartphone. Cobra's King Forged Tec Black Irons feature the premium True Temper AMT Tour White - Black PVD shaft as standard. A tour-weighted shaft, it delivers a low trajectory and low spin performance. If this doesn't suit your game Cobra offer a great selection of aftermarket offerings, engineered to promote optimal trajectory, feel and control throughout the set.