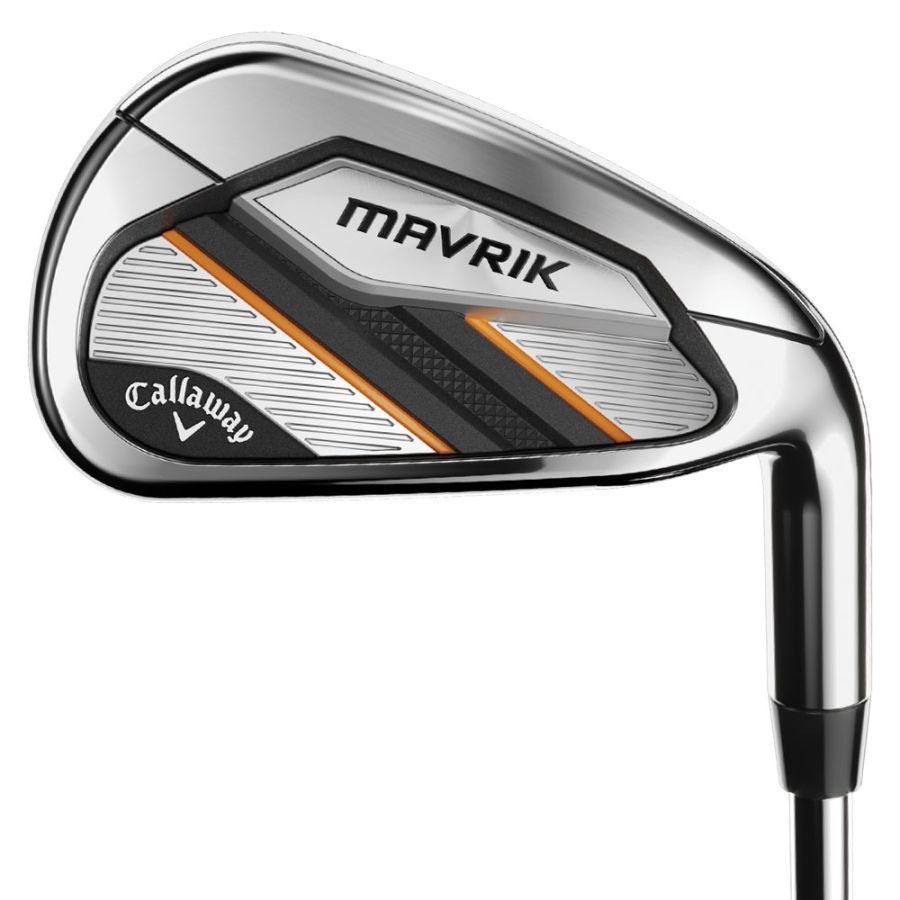 Forgiveness, feel and speed from another dimension - Callaway's new Mavrik features Artificial Intelligence and supercomputing for the first time in an iron, linking with the legendary Cup Face technology to create an iron unmatched by others.

Targeting a broad spectrum of players, Mavrik is a gamechanger for iron technology. The innovative A.I. Supercomputer generated Flash Face as seen in Epic Flash has now come to supercharge Callaway's irons, creating sophisticated waves behind every clubface for extreme ball speeds and increased spin robustness. This stars alongside Callaway's industry-leading 360 Cup Face that flexes and releases at impact across the entire face for unbeatable forgiveness even on your worst strikes.

At the heart of Mavrik sits a newly developed tungsten energy core. This technology inserts purposely crafted tungsten weights throughout the head to provide a powerful feeling at impact with optimised launch and spin rates. This allows the lofts of each iron to be strengthened for extra distance without compromising trajectory control and landing angles.

Callaway has also included their proprietary urethane microspheres - a premium technology developed to provide the purest feel and an incredible sensation at impact. Over 1 million have been loaded into every clubhead throughout the set, which absorbs any unwanted vibrations and maximise COR even on off-centre strikes.

Careful attention has been given throughout the set to make Mavrik not only incredibly fast and forgiving but also fully playable too. In the long irons, A.I. features heavily in the face to give high launch and powerful ball speeds, while the mid and short irons gradually focus more on spin consistency, control and precision to help you attack the pin from anywhere.

MAVRIK Irons appeal to a wide range of players, with incredibly fast ball speeds from A.I. and Flash Face architecture for long, consistent distance. To provide complete performance to match these distance technologies, each iron is engineered to optimise launch and trajectory while promoting player preferred trajectories, spin rates, and land angles.

Industry-leading Ball Speeds from Flash Face Cup Technology
For the first time, Callaway are using Artificial Intelligence in an iron. They have created a sophisticated face architecture that’s unique to every loft, so they can create a significant boost in ball speed and increased spin robustness off of every iron. And ball speed is further enhanced by their 360 Face Cup that flexes and releases at impact.
Optimal launch from Tungsten Energy Core
The custom tungsten-infused weights in each iron allows Callaway to locate the position of the CG in each iron with extraordinary precision while still maintaining ball speed in the Flash Face Cup. This promotes optimum launch and ball flight through the set, from strong lofts and player preferred trajectory, spin rates, and land angles
Unprecedented feel from Urethane Microspheres
Callaway has implemented their patented urethane microspheres to comprehensively absorb unwanted vibration for pure feel, while also maximizing COR for incredible ball speed.
Premium components
MAVRIK MAX is available in stock premium shafts from True Temper, Project X and KBS with premium Golf Pride Grips.