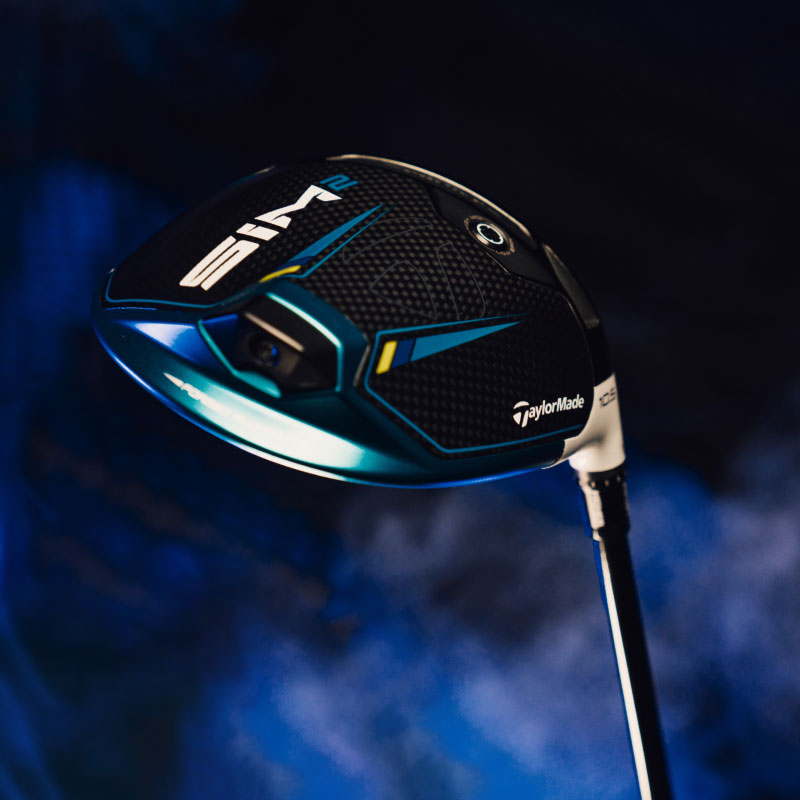 The much-anticipated SIM2 family is out now and many are suspicious to whether it can trump its older brother and the original SIM family of equipment. The SIM range caters for many different types of players and lots of flight variation. TaylorMade has stuck with their futuristic design and electric blue colourway.

We’ll start at the top of the bag with the all-new SIM2 Max Driver. One of the most popular drivers of 2020 on and off the tour the Sim Max was able to produce maximum ball flight whilst being super forgiving.

TaylorMade has stuck with their Speed Injected Twist Face technology which helps align off-centre strikes and improve ball speeds by calibrating each head to the threshold of the legal speed limit. The Twist Face technology will help inspire confidence when at address as many club golfers are dreading their worst shot, not excited for their best. This could eradicate all ill-feeling when teeing the ball up and help improve your game.

What’s new you may ask? Well, TaylorMade has a brand-new Forged Ring Construction. This is the key to being able to unlock a new dimension of distance and forgiveness. Forged from a lightweight and high strength aluminium that is milled to an exacting shape, it connects the weighting at the rear of the club, a full carbon crown sole, crown and a new milled cup face.

Like the previous SIM model, it aims to produce a mid-high launch with a low spin which can increase your total ball distance off the tee, something which is highly desirable for most golfers.

TaylorMade has also released the SIM D Driver. This is TaylorMade’s draw bias design, aka the anti-slice driver. The most common shot shape of any club golfer is the slice. Which makes this driver extremely well thought amongst the amateurs. I mean who wouldn’t be excited about the potential of removing a slice from their game? This driver will produce a high launch with mid-spin, which for most golfers with a slower swing speed, would be perfect for.

Among the new release of SIM equipment includes the new fairway woods. The SIM Max fairway wood has a 190cc head shape to give the maximum forgiveness and lowering the CG placement for explosive distance. The classic V Steel Design has returned with an updated look. This design redistributes the weight to enhance forgiveness while maintaining that lower centre of gravity many players desire. It’s depressed heel and toe has minimised the sole area, adding to the V Steels turf interaction and versatility benefits.

Like the new driver range, the fairway woods also have a draw bias model. The Max D goes hand in hand with the SIM Max D Driver and will favour a right to left ball flight (left to right if you’re left-handed). This is a much easier club to launch in the air, so if you’re new to golf or have a slower swing speed this will be the club for you.

The TaylorMade woods include a Thru-Slot Speed Pocket which adds to the face flexibility and preserves ball speed and distance, especially on lower face strikes.

The fairway woods also come in a Titanium variant. This is even lighter than the already light SIM fairway woods and offers an even lower CG but a higher level of MOI. The face of the club is a Titanium Twist face which also helps with miss strikes and can help prevent golfers inherent tendencies.

The rescue or hybrid golf club is a huge fan favourite due to its versatility and adaptability to conditions. This is a club that can be used off the tee, hit from the rough or fairways. So it’s imperative you pick the right one!

The SIM2 boasts a C300 Steel Twist Face which allows for a strong fast face engineered for explosive ball speeds, paired with Twist Face technology to offer that little bit extra help when it comes to your miss-hits. Going off the success of the Rescue on tour last year, this isn’t a club to be slept on. Alongside its high ball flight, its also a very workable club for all skill levels due to its small profile, forgiving head shape.

The SIM2 range also offers a standard version of the rescue which is aimed at a player looking for an even higher ball flight. This is a modern head shape with a more squared face shape, which is a lot more inviting at address for most players.

To complete the SIM2 equipment range we have SIM2 Max Irons. Some of the best game improvement irons of 2020, the SIM irons were very popular amongst new golfers. The irons boast a brand new multi-material Cap Back Design, utilising high-strength stainless steel and ultralightweight polymers. This is aimed to maximise distance, forgiveness and feel with an extremely low CG. The face uses a new Echo Damping System which has a softer polymer blend and multiple contact points across the face to eradicate harsh vibrations and creating a forged like feel.

TaylorMade has heavily focused on maximising total distance alongside having the most forgiving clubs possible. They’ve done a great job at making their clubs for all level of golfers. Whether you’re a touring professional or high-handicap club golfer, there is definitely a club for you in the SIM2 range.